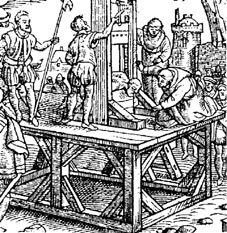 
The Guillotine was not the first beheading machine of its kind. There is evidence that as early as 400 B.C there was a pre-guillotine device commonly used. There were beheading machines in many countries with many names. Some examples are "The Planke", which had been used in Germany and Flanders for centuries, and the "Halifax Gibbet", which used in England for a while. The Halifax Gibbet was the influence for another beheading device called " Scottish Maiden", which was created around 1561. The Scottish Maiden was last used in 1710, killing over 120 people. It is now on display in an Edinburgh museum. These three are the primary machines similar to the guillotine, but there were many other early machines used around Europe, including The Mandara in Italy. Although these Early Guillotines have had an impact on people, it was not close to the legacy the guillotine was about to bring.

Invention of the Guillotine


The Guillotine was invented by a Frenchman named Dr. Joseph-Ignace Guillotin in the 1780's. Although there were earlier versions, Dr. Guillotin improved the function and quality of the machine very much. He improved the blade, adding a circular collar that held the neck of the victim. The guillotine was invented to be a symbol of democracy and equality, though the public view changed soon after. Beheading machines were usually reserved for the nobility, but with this invention executions would take place in the same fashion for whoever, regardless of rank. After Dr. Guillotin made the design for the Guillotine, he asked Tobias Schmidt, a German harpsichord maker and inventor, to construct the first model. Dr. Guillotin first tested the machine on April 17, 1792. He decapitated straw, sheep, and several corpses to ensure its function. When a corps with a very large neck was not beheaded after three tries, they raised the uprights and modified the shape of the blade, making it more triangular. The Guillotine was adopted as the official means of execution of the French Republic on March 20th, 1792. It became known as the Guillotine, named after its creator. The descendants of Dr. Joseph Guillotin have since changed their last names. The first official execution by Guillotine in France was of thief and assassin Jacques Nicolas Pelletier on April 25th, 1792. This was the start of the Guillotines' career that would last in France for almost 200 years.

Posted by historyday at 5:38 PM

One of many executions in France